Links
Things to Do

The dwindling nutrients in the soil of the tree of liberty.

In Light of all the recent so-called threats against all those spoiled members of congress, i want to make it clear that this is not a call to arms but an honest assessment of the consequence if this outright corruption is allowed to continue.
Anthony D Dolpies

If You follow politics very intensely few things a politician says should leave you slack jawed. When it does happen it’s usually a result of some outrageous claim or highly exaggerated platitude.  Obama does this more than most, but nothing he has said before has left my mouth gaping as when he told Brett Baier of Fox News, that he really doesn’t care about the process by which legislation is passed.

Despite what our esteemed executive believes process is extremely important. The president was trying to be political slick, seeking to distance himself from what has been an overtly messy & corrupt attempt at passing the democrat health care bill. This is extremely curious because this president seems to be extremely concerned about just about every other process than the one he actually has any real authority over. Wether it’s the way Americans buy health care, the way auto manufacturers build their cars, the way banks make loans and how they should be repaid or even the process by which whatever executive he seeks to demonize on a particular day gets paid. By admitting his disregard of the legislative process he inadvertently connected himself directly to it. But before we get into that lets look at why process is so important, not just in government but in all things.

Most of my adult working life has been spent in auto sales, about fifteen years primarily between two different dealerships which where polar opposites when it comes to process. The first was run by two Russian immigrants, at first this was extremely inspiring to me, the most visible partner, meaning the one who was always at the dealership was not more than ten years older than I and was now, in his early thirties a senior partner in a major Philadelphia dealership. It was soon very apparent that this gentleman was only interested in a quick buck and was more concerned with driving new Lamborgini’s on the dealerships credit than he was with how business was being conducted in the showroom. The result was a free for all,  and the dealership soon began having various legal problems as a result of dirty dealing and it’s franchise license was eventually revoked. The younger partner (Serge) confidently split the scene back to Russia and left the more honest partner holding the bag. Serge did not care about process, the ends justified the means.

My next example is of a dealership where process mattered, it was a family owned dealership that has been around for about 80 years, still run by the same family. One of the partners who name is consequently on the dealership, still works the service department dressed in a mechanics jumpsuit, making sure customers are properly attended to he even makes keys for them. This honest ethic is enforced in every area of the business from the showroom to accounting etc. The result is a dealership with an excellent reputation, which pays off in tough economic times, in which they end up doing better than most, everyone benefits from principled executive leadership. The Presidents statement exposes his deficiencies as a result of inexperience in the private sector. Not every executive or industry seeks to rip off their customers, in fact most do not.

When the president admits he does not care about the process by which legislation gets passed, he admits that he is incapable or disinterested in providing principled leadership. The constitution provides us with a process by which our elected representatives are to govern, When you look at the presidents oath of office one could argue that providing principled leadership is probably his most important job. When Obama says he is not worried about the process the result is the overtly corrupt process which is now on display within our government. The President recently said that passing his health care plan is referendum on Americas character. Again this is a curious statement coming from a man who has all but admitted that as far as he is concerned the ends is justified by any means. This is not the character of the United States and consequently why so many Americans have rejected his vision.

We Can No longer Afford to Hope

pi partiship i think not

So much for all that bipartisanship

Dems May Not Have Health Proposal Before Summit With Obama...

Pelosi aide says Democratic congressional leaders have settled on legislative "trick" to pass Obamacare; So why have a summit? UPDATEDRead more at the Washington Examiner: http://www.washingtonexaminer.com/politics/With-absolute-power_-Team-Obama-grows-stupid-83945567.html#ixzz0fFo5UNf5

APWASHINGTON - There's a problem with the bipartisan jobs bill emerging in the Senate: It won't create many jobs. Full Story »
More Bailouts
Thu Feb 11, 12:07 am ET

WASHINGTON (Reuters) - The commercial real estate market has fallen more than 40 percent from early 2007 and a wave of loan failures in the next few years could threaten the economy just as it struggles back to its feet, a report from the panel overseeing the $700 billion bank bailout said.Full Story
»

Biden: Iraq Will Be One Of Obama's "Great Achievements" 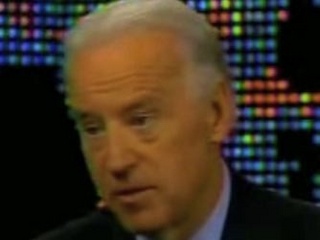 While speaking at the 2010 national prayer breakfast, President Obama invoking health care proclaimed; that “we may disagree about the best way to reform our health care system, but surely we can agree that no one ought to go broke when they get sick in the richest nation on earth.” This statement was meant to be another of the Presidents’ toothpaste ad platitudes. (Nine out of ten dentists agree) But it actually exposed his extreme adherence to the Marxist ideology which has created such a chasm between the American people and himself.
It is certainly true that the majority of Americans have no interest in seeing innocent individuals struggle, financially or otherwise. Our nature however dictates that those struggles are a part of the human experience, and it is that very nature that limits our ability to address these struggles. I don’t know anyone who wants to see people go broke for any reason, but the question is, at what and who’s expense? It is for this reason that Obama tries to wrap his agenda in a cloak of moral superiority. But there is nothing moral about forcibly limiting the individual’s ability to provide for himself and his family for the sake of political expediency.
Obama suggests that we have this “moral” obligation as a result of being “the richest nation on the face of the earth.” This is an extremely ideological statement from a man who just days earlier declared that he is not an ideologue. While it is true that The United States is the home of a fourth of the world’s wealth, President Obama implies that this wealth belongs to the state. Our current deficits show that nothing is farther from the truth. The nation’s wealth in fact resides with its private citizens. It is extremely laudable for an individual to freely commit a portion of his wealth to the service of others, but there is however no moral obligation to do so. Finally, politicians seeking to use the iron fist of government to coerce the individual into the service of others or some dictated high virtue is not morality, it is tyranny.
Anthony D Dolpies

You Think Your Safe

The Senate health care bill wouldraise effective marginal tax rates on lower and middle-income singles and families up to 41%.
Windmills installed by Minnesota cities to meet the state's new mandated global warming renewable energy requirements arefailing to provide any power thanks to the snow.
The House voted Thursday to allow the federal government to go $1.9 trillion deeper in debt, an increase of about $6,000 for every U. S. resident.
Stocks worldwide suffered sharp losses as the cost of insuring Greek and Portuguese sovereign debtsoared.

Bailouts could lead to bigger meltdown

Federal Watchdog: TARP Program Opens Way for Deeper Economic Meltdown
(CNSNews.com) – Neil Barofsky, the man tasked with overseeing the administration of the Troubled Assets Relief Program (TARP), told Congress in a report released Sunday that the bank bailouts have cleared the path to another financial crisis -- potentially even more grave than the 2008

Bravenet Blog
Get One For Free!
powered by